Overcome the crocodile within 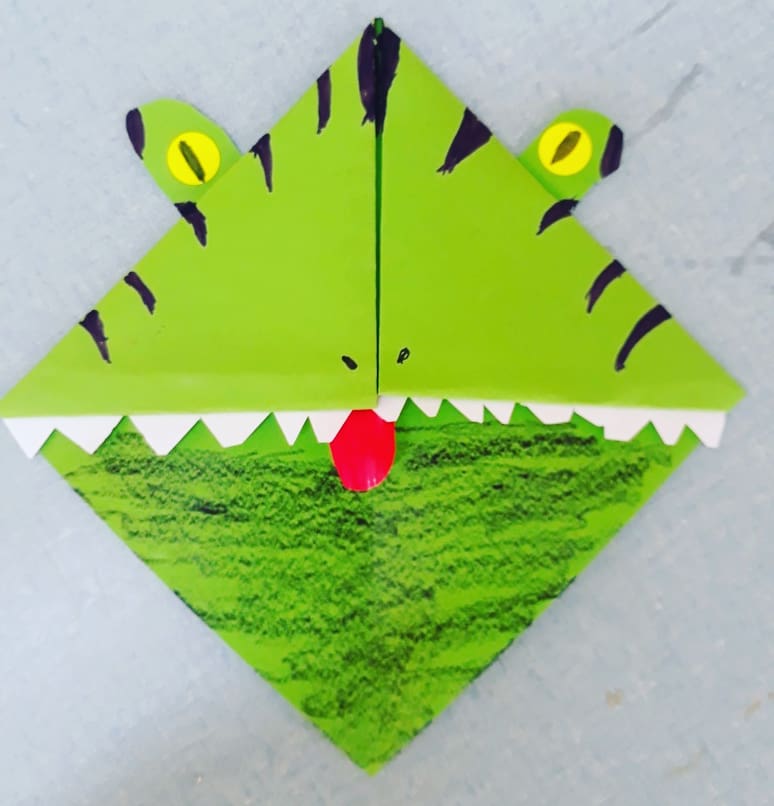 This week we looked at a representation of fear in the form of a crocodile. Those yellow eyes, huge jaws and sharp teeth (all 80 of them) – what’s not to be scared of! I had some pictures of crocodiles to show the children and quite frankly, just looking at the pictures, I got shivers down my spine. So, I thought it fitting to personify fear as a crocodile and unpack our experience of it.

I recently read this story:
Once there was a young warrior. Her teacher told her that she had to do battle with fear. She didn’t want to do that. It seemed too aggressive; it was scary; it seemed unfriendly. But the teacher said she had to do it and gave her the instructions for the battle. The day arrived. The student warrior stood on one side, and fear stood on the other. The warrior was feeling very small, and fear was looking big and wrathful. They both had their weapons. The young warrior roused herself and went toward fear, prostrated three times, and asked, “May I have permission to go into battle with you?” Fear said, “Thank you for showing me so much respect that you ask permission.” Then the young warrior said, “How can I defeat you?” Fear replied, “My weapons are that I talk fast, and I get very close to your face. Then you get completely unnerved, and you do whatever I say. If you don’t do what I tell you, I have no power. You can listen to me, and you can have respect for me. You can even be convinced by me. But if you don’t do what I say, I have no power.” In that way, the student warrior learned how to defeat fear.

In the lessons this week, we discussed how fear talks fast in your face, often taking you by surprise. How the voice inside your head gets louder and louder telling you that you aren’t good enough, that you can’t do certain things as well as the next person, that you are going to fail, and even that there are monsters under the bed. That is fear talking. We spoke about what the warrior girl learnt in the story – that if you don’t listen to fear and don’t do what is says, it has no power.

We discussed the things that make us fearful and then focused on defeating our fears. We recited the below mantra a few times while following a sequence of warrior I, II and III poses:
I am brave.
I am bold.
I am me.

The children did so well, owning the energy of courage. It was beautiful to see – strong, powerful focus in the poses.

We then moved onto some mindful artwork. It was the first time I have done origami with the kids and it was a great success. I kept it simple and the results were gorgeous crocodile bookmarks. The children had lots of fun decorating them and personalising them. Some even wrote the mantra “I am brave. I am bold. I am me.” on the bookmarks. Very special.

Then it was time for a guided visualisation. This week I chose “Enchanted River” from the Mindful Moments for Minis CD. The visualisation talks about letting go of unpleasant and uncomfortable feelings and letting them wash down the river. The visualisation was a nice way to solidify the concept of rising above our fears.

This week I would like to leave you with the following as you reflect on your own battle with fear:
“When things fall apart or you feel fear, rather than feel you’re getting the short end of the stick, feel lucky. Only when you feel fear will you feel the opportunity to have the courage to grow. Being courageous and having a great life is all about being intimate with fear in a wise and graceful way. Feel the fear, and then do what needs to get done. Rather than being depressed about fear, lean into it, and see it as an opportunity to learn and grow.”