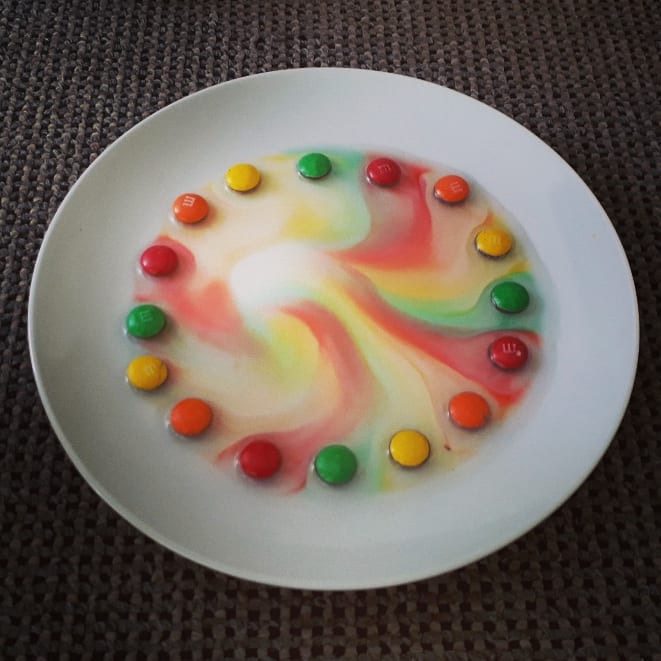 We started off the classes this week learning a new way to connect with the breath. A few of the children had mentioned last week that were finding it hard to connect with their breath in the “world out there”. This week I showed them a simple technique which I call Petal Breathing where you imagine your hand as a flower, with each finger being a petal. You trace the fingers and thumb of your hand with the fore finger of the other hand. You inhale on a trace up to a finger tip and then exhale on a trace back down to your hand. This leaves you with having taken in 5 deep breaths. The physical action of tracing the hand helps a child to stay focused on their breath.

We then moved straight into our theme for the week – Share the Good. I placed 20 M&Ms of various colours on a plate. We discussed whether they were all the same. Yes, they were all M&Ms but some were chipped, some were different colours, some had their M visible while others had their M on the underside. I then placed hot water in the plate and we waited and watched.

As the sugar coats of the M&Ms melted in the hot water, beautiful patterns of colours formed on the plate. The photos I took don’t do justice to how beautiful the patterns were! I explained to the children that, just as a beautiful pattern of colours was formed when the M&Ms shared their colours, when we share the goodness we have inside of us with others so too does something beautiful happen.

We thought about that for a bit while we continued to watch the sugar coats dissolve until all that was left was the inside chocolate bit. I asked the children whether the chocolate blobs left over were the same or different. The children answered correctly that they were clearly all the same – chocolate blobs! All the M&Ms looked the same on the inside despite originally having many differences with their outer sugar coats. So, in essence, the M&Ms were different, but the same. The same can be said about people. We discussed how people can look, think and be different to us yet we are all people. Different but yet the same.

We then had a time of sharing where each child was given an opportunity to share something they had in common with everyone present in the group, and then something that was special and unique about them. Some wonderful observations came through! A lot of the things we had in common were to do with body parts – 2 legs, 2 eyes, fingers, etc but one little guy in the youngest group said “We all have life.” Wow. I loved that. Some of the children felt a bit shy to share something that was special or different about them but the groups were wonderfully encouraging and the children helped each other to discover things that made them unique and special in the group.

It was then time for a tactile mindfulness exercise. I passed around a bag of stones and asked each child to pick one. I asked them to observe their stone closely. Was it rough or smooth? Was it one colour all over or a few different colours? Was it a circular shape or did it have sharp points? Did it feel heavy or light? Did it have any strange markings? I then asked all the children to put their stones into the middle. Again, we noted that although they were all stones, they were different. Again, the concept of different yet the same.

I then explained to the children that the stones made up a puzzle. Each stone had a white marking and when put together in the correct way, it formed a shape. It was wonderful to see the children working as a group trying out different variations. All the groups managed quite quickly to work out that it was a rectangle but even in that, there were some quite square rectangles while others were long and skinny. We spoke for a bit about how although each stone was different, each stone was important and was needed to complete the puzzle.

We then moved into some art work. I love the food-colouring-in-the-milk exercise (see “mindful art in motion” in this previous post) and I felt it worked beautifully in demonstrating how sharing our goodness with others helps add beauty to the world. We worked in small groups and each child had a chance to make the colours dance. As always, it was mesmerising! We then did something a bit different this time. I asked the children to write their name in big on a piece of paper. For the little ones, they drew a “symbol” which represented them. I then dipped the paper into the milk and voilà! A beautiful background of dancing colours behind their name – representative of all the beautiful colours of goodness inside of them waiting to be shared with others.

Finally, it was time for a guided visualisation. I took them on a journey to a beautiful lake. Still and calm. Where I encouraged them to connect with the deep goodness that exists in each one of us. To reach that goodness and let it come to the fore to be shared with others.

I would like to leave you this week with the following quote from C.S. Lewis: “There is no excess of goodness. You cannot go too far in the right direction.”