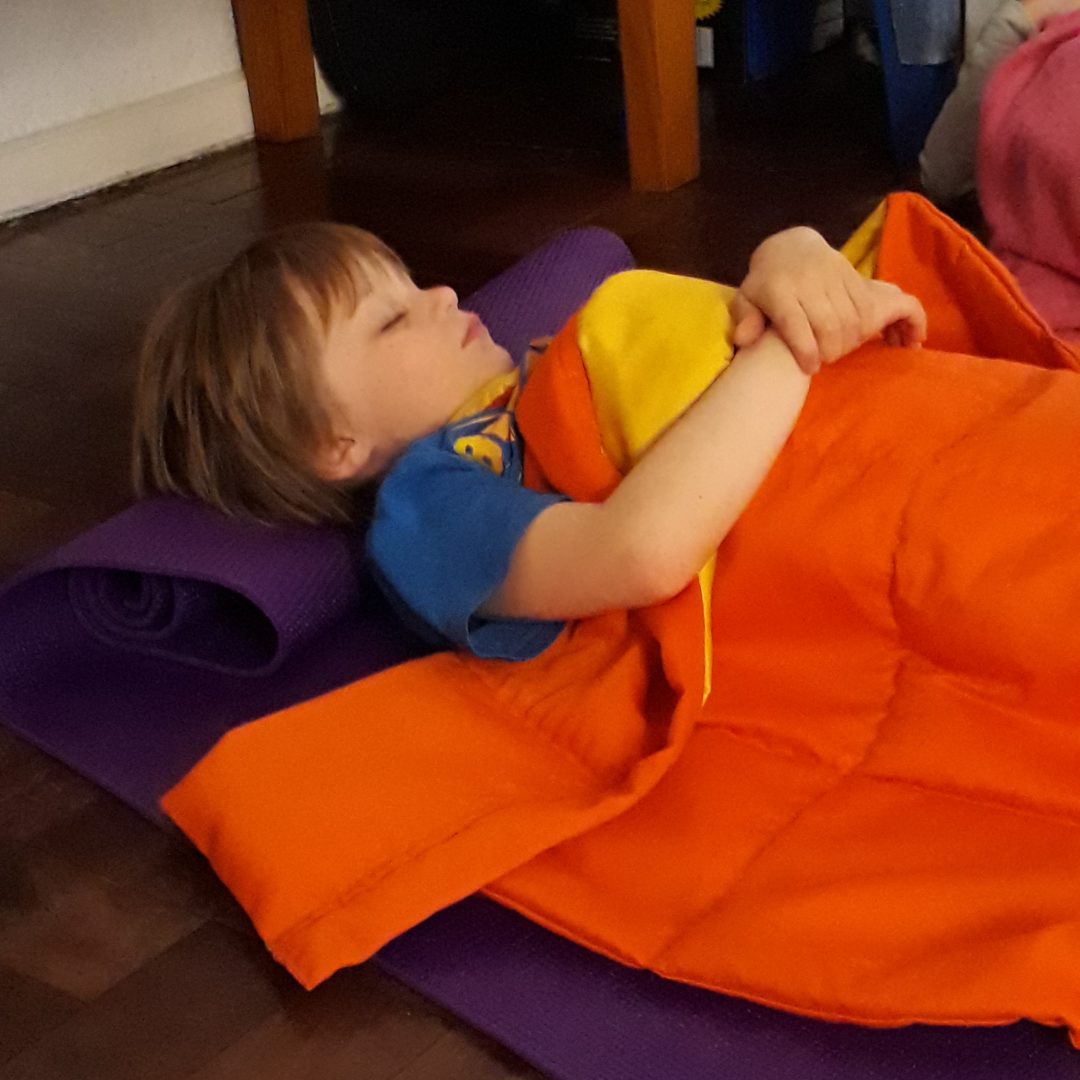 This week at Mindful Minis we looked at the second colour of the rainbow, Indigo. Again, we started the classes by discussing things in nature that are indigo in colour – stormy skies, flowers, peacocks, butterflies, blueberries and more.

I asked the children to close their eyes and imagine the colour indigo all around them. I asked them to breath in the indigo light and then notice how they felt. Quite a number said “happy”, a few said “calm and peaceful”, another child said “alone” and another child commented “sad”. It was interesting to see the different responses to the colour. Or perhaps it was an opportunity for hidden feelings to make a brief appearance.

We then discussed how in yoga the colour indigo is associated with the forehead and eyes. I asked if anyone knew what the “third eye” or intuition meant. Quite a few kids commented that only aliens have a third eye! So, before we got too far off the track talking about aliens, I did my best to explain intuition. Not an easy task. But in one of the classes, a little girl assisted me with a great example. She told us that once at a school fete, when they had a cake raffle, she just had this feeling that she was going to win the raffle. She didn’t know why she had the feeling or what it meant but she just felt it was her lucky day. She just knew in her heart! And then she ended up winning the raffle. I thought this was a wonderful example for this age group to describe intuition.

I then took the children through one of my favourite mindfulness exercises. One that really emphasis what mindfulness is. I had a treasure box filled with hidden “treasure”. I brought it out and immediately the children’s faces lit up and there were big smiles all around. I asked everyone what it felt like inside their bodies right at that moment. I mostly got “feeling word” answers such as “happy”, “excited”, “curious”.

I then shook the box and asked what they thought was inside the treasure box. Lots of interesting answers – chocolate gold coins being the most common! Or perhaps that was wishful thinking on their part. Again, I asked them to notice what was happening inside their bodies. How did it feel not knowing what was inside the box? They presented me with more feeling words of “frustrated”, “bored”, “impatient”, “irritated”. So again, I asked what did those actually feel like in their bodies?

Then I pretended that the key could not open the box so it meant we would not be able to find out what was inside the box. Lots of “Oh Nooooooooo!”. I asked them: “So, now how are you feeling?”. They were still mostly giving me “feeling words” at this point. I pushed them more and asked: “But how does ‘disappointed’ actually feel inside your body?” In one class, one little guy shouted out “heavy!”. Yes – that is exactly how disappointment feels – heavy. It seemed that triggered a lightbulb moment for some of them and they started getting the hang of it. Another little girl in the same class said: “My heart feels like it has an anchor pulling it down”.

I then turned the key over and it slid easily into the lock. Much excitement. “What does that excitement feel like?” I asked. “Bubbles bursting in my body”. “Little sparks all over”. “Like I want to jump up and touch the ceiling”. Now they had it!

It was a great exercise and in each class, I felt the children formed a slightly deeper understanding of mindfulness and experienced it first-hand.

In some of the classes we then moved into some mindful movement. We did a sequence of floor poses that required core strength and some balance. Lovely focus and calm around the room. We then moved onto the guided visualisation. I played one of the demo tracks (Your Invisible Bubble) from the new CD “Mindful Moments for Minis” (to test the water a bit). Some wonderful feedback. We discussed afterwards how they felt after the meditation. Lots of comments around feeling important, calm and strong. I am not sure how many of the children realised it was my voice on the CD but one little guy did ask if I had recorded myself into the computer ?

Some of the classes ended at that point, whilst others had some time to make rainbow macaroni necklaces. A lovely activity with lots of bright colours for our rainbow theme but also requiring a lot of concentration, especially with the younger children who are just getting the hang of threading. Some of the necklaces ended up as bracelets and ankle chains but all were beautifully patterned and worn with pride.

I did encourage some of the children who struggle to fall asleep at night to use the exercise of breathing in the indigo light at home when trying to fall asleep. Indigo is known to be a very soothing and calming colour. And imagining indigo light all around and breathing it into each part of the body can help to let go and relax.

So, this week, I encourage you all to find the quiet and listen to your inner voice. I leave you with the lovely quote from Pat Obuchowiski: “You have the Answer. Just get quiet enough to hear it.”