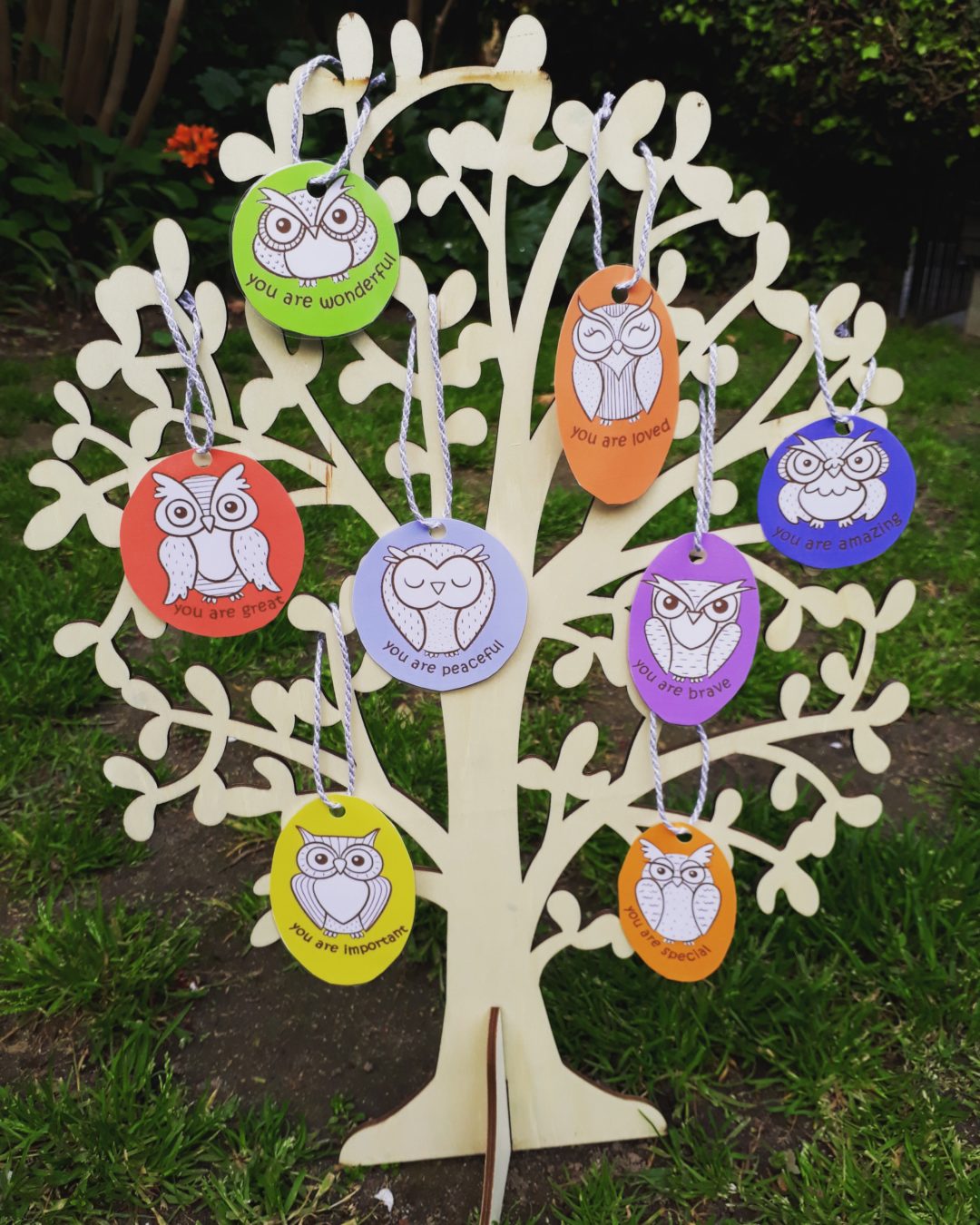 This week I started off the lessons with something new, that I discovered on the inspiring site Wild Things Yoga by Kathleen Callaghan. She uses a mindfulness practice called “butterfly brain” at the start of some of her classes to centre and ground the children. So, I tried it with the Mindful Minis children and it was great!

I explained to the children that we can imagine our thoughts as butterflies – always flying around in our heads and a bit tricky to catch. I asked them to close their eyes and focus on their breathing, but that if they noticed a thought popping into their heads, that they simply “catch” it with their mindful breathing, and put it into their lap to think about later. I guided them with verbal cues to breath in and out, and reminded them from time to time to notice if they had any “butterfly thoughts” that needed to be caught. Some of the children, with their eyes firmly closed, actually raised their hands in front of their faces and grabbed at the air to “catch” their butterfly thoughts. Too sweet! The calming effect of “butterfly brain” was clearly evident and the children were, for the most part, focused and attentive afterwards, ready for the next part of the lesson. I think this was a wonderful, tangible image for them to work with when practising mindfulness and I will definitely use “butterfly brain” again.

The next part of the lesson was a bit of theory about how our brain and body works in response to threat. I had a picture of the brain to highlight the 3 main parts involved – the amygdala, the hippocampus and the pre-frontal cortex. Big words for little people but kids at this age are often sponges of knowledge and have a wonderful ability to absorb information.

I explained that the small part in our brain, called the amygdala, is like a Guard Puppy. Not a fully-grown dog – just a puppy – but it is his responsibility to alert us and keep us safe from dangers. So, for example, if we see a snake in the grass in front of us, Guard Puppy will “bark”. We will probably get a big fright, but we will be warned to stay still until the snake goes away. When Guard Puppy “barks” inside us, we might feel our hearts beating faster or our breathing might get quicker or we might feel some other fight-flight-freeze response. But, Guard Puppy is still a puppy so he is still learning what is a real danger and what isn’t. This means that he sometimes barks to warn us about things that aren’t really dangerous, like worries or silly thoughts, or he barks simply because we get too excited or too tired.

When Guard Puppy barks loudly about things that really aren’t dangerous, it’s hard for the other parts of the brain to work – especially the hippocampus. I explained to the children that our hippocampus is like our Memory Elephant. He has big listening ears to hear and help us remember everything – like the names of our friends or how to brush our teeth. But Memory Elephant is a bit of an emotional elephant. He gets upset and confused when Guard Puppy barks for no good reason, and then he shuts down his big listening ears and wants to hide away. He also then forgets and can’t remember anything!

Luckily, we have a part of our brain that is like a Wise Owl. This is the pre-frontal cortex. This part of the brain helps us to think well, focus on what’s important, solve problems, make friends, understand books that we are reading – many useful things. Wise Owl is also the part of the brain that can calm down Guard Puppy.

If Wise Owl is awake, she can see if Guard Puppy is barking about something that is not really dangerous. She spreads out her beautiful soft wings and strokes Guard Puppy so he calms down and stops barking. Wise Owl also strokes Memory Elephant so he too can calm down, open up his listening ears again and remember everything he has learned.

I explained to the children that Wise Owl can only help Guard Puppy and Memory Elephant if she is awake. And the way in which we can wake up Wise Owl is with our mindful breathing. I explained that when we take two or three mindful breaths, Wise Owl opens her big eyes.

We then discussed a few examples where it might be helpful to wake up Wise Owl. One little girl is going to be in a concert this weekend and she is feeling a bit nervous about being on stage. So, I suggested she remembers to do 3 mindful breaths before going on stage to wake up Wise Owl. Wise Owl will then be able to stretch out her soft wings and stroke Guard Puppy and Memory Elephant to calm them both down.

This is language you can use at home with your child if you see anxiety rising. Perhaps do 3 mindful breaths with your child. Encourage them to imagine Wise Owl softly stroking Guard Puppy and Memory Elephant, helping to calm them down.

We then moved into a version of a Loving Kindness meditation. I had made a variety of Affirmation Owls that were sitting on my Tree of Encouragement. Each child got to choose an Affirmation Owl from the tree to present to the child on their right. As they gave the Affirmation Owl to their neighbour, I asked them to make eye contact and say the affirmation to their neighbour e.g. “You are brave”, “You are great”, “You are loved”. When working on this lesson plan, I wasn’t sure how this Loving Kindness exercise would turn out. I was worried the children might feel shy or embarrassed and not want to do it, but it was the complete opposite! In each class this week, I felt a shift in the energy in the room at this point in the lesson. So much love and respect! I don’t really know how to aptly describe it but I felt part of something quite special watching each child pass an Affirmation Owl to their neighbour with a genuine, heartfelt token of encouragement for their neighbour. Truly wonderful.

From there we moved onto some mindful movement. I used the delightful book “A bit lost” by Chris Haughton, which is about a little owl who falls out of his nest and then tries to find his mummy. He meets a squirrel who helps him, but at first the squirrel gets it completely wrong by taking the owl to different animals such as a bear, rabbit and a frog. Finally, the squirrel reunites the little owl with his mum. As the baby owl met each new animal in the story, we moved into that animal pose. I then read the book a second time, but split up the class into pairs and threes so that each group acted out a single animal pose when their animal was mentioned in the story. Lots of fun!

Then it was time for some mindful artwork. I asked the children to draw a picture of their Wise Owl. It was a free drawing exercise but I provided some bit of bark for the children to include in their picture if they wanted to stick it on.

And all too quickly, it was the end of the lesson! I thoroughly enjoyed teaching all the classes this week. I think the image of a Wise Owl that can help calm a barking Guard Puppy and a frightened Memory Elephant is a powerful tool for young children, to help them manage their fears and anxiety. And witnessing the Affirmation Owl Loving Kindness meditation in each class made my heart smile. Much loved was shared. So beautiful to see.